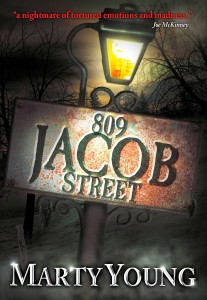 809 Jacob Street is an interesting read! A fascinating concept based on the manifestation of inner demons, the sort of psychological investigation I enjoy. The characters were layered and complex enough to keep my interest when the pacing flagged.

Pacing and structure were the only things that let this book down. There were numerous chapters (fairly short chapters, mind you) that felt as though they were telling the same part of the story over and over again, hammering the scenes home. Rather than the short chapters increasing the pace, the fact that nothing really changes within them slows it down, making this repetition obvious. If they had been merged into one chapter this wouldn’t have been such an issue.

Most of the early portion of the story is told from the perspective of Joey Blue, while the latter portion is mostly told by Byron. They are all but mutually exclusive, the only thing that connects them being the house itself, forcing 809 Jacob street to become its own character. While it does have its own presence, it didn’t feel quite strong enough to actually bring this book together into one cohesive story. It could easily have been two separate stories, Joey’s the very psychological portion and Byron’s containing the action – which is why it doesn’t quite work.

Yet despite this lack of internal cohesion and focus, this book is worth a read. Great writing, interesting characters and a promising concept gives the reader enough to enjoy and ponder over, and you will ponder, and perhaps wonder, as I did, what would await me inside 809 Jacob Street.