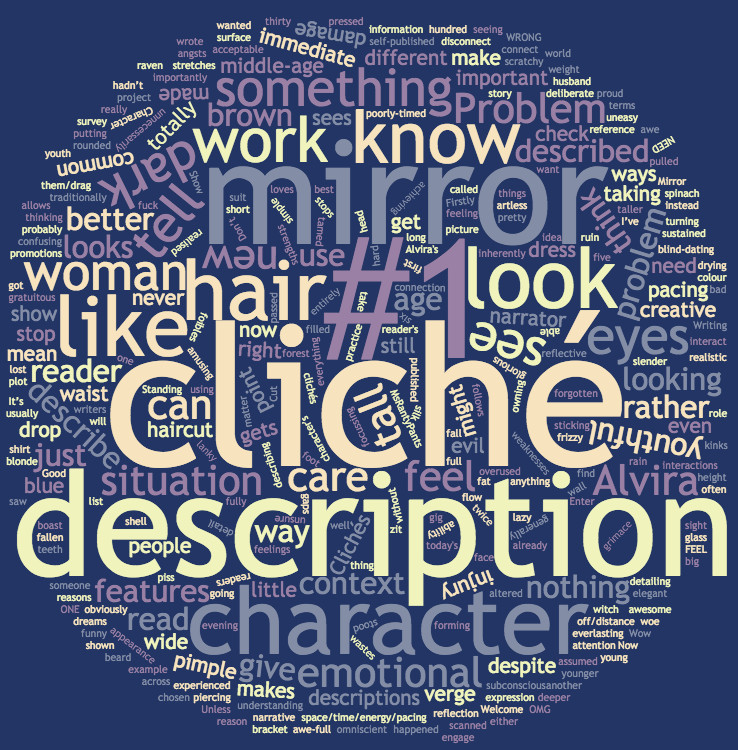 Mirror mirror on the wall, tell me what I look like because I’ve totally forgotten. Welcome to today’s cliché:

Character using a mirror (or other reflective surface) to describe themselves to the reader.

So, why is it a problem?

This is often the one and only reason people give for it not being an acceptable practice, which is confusing for new writers. So taking this a little deeper… Clichés are clichés because they work, not only work but work so well that they are overused. Good. No problem. That doesn’t make them inherently bad. But if there are better, more creative ways of achieving the same thing, then sticking to the cliché is lazy. If the cliché gets in the way of your narrative then don’t do it.

When we look in the mirror, we aren’t doing so to see what we look like.

When I use a mirror I’m not thinking to myself:

“Wow, what pretty hair I have, it’s blonde and short and kinks out funny when it’s drying.”

“I have piercing blue eyes.”

“I look about thirty,”

NO ONE DOES THIS!

We might generally check to see that we are looking our best, but usually in terms of:

“Did the rain make my hair frizzy?”

“Is there spinach between my teeth?”

“This shirt makes me look fat.”

I know what I look like. I don’t need a mirror to tell me.

“But wait!” I hear you cry. “My story has an omniscient narrator. They can describe my character in the mirror, right?”

Problem #3: It gets in the way of a reader’s ability to project themselves into the role of your character.

If your description of what your character is seeing in the mirror is different to what your reader sees when they look in their own, there is an immediate subconscious disconnect. This doesn’t mean that we cannot connect to a character that looks nothing like us, but that the artless detailing of features without emotional context stops the reader from being able to fully engage with the character’s feelings.

For example. Your character is described as follows:

“Standing before the mirror, Alvira saw a tall, slender woman on the verge of middle-age, but still owning the rounded features of youth. Her dark hair stretches to her waist in a fall of raven silk and wide brown eyes take in the world in an expression of everlasting awe.”

Firstly, fuck you Alvira for still looking youthful despite your age. But more importantly, I don’t feel I have anything in common with you. I’m not called Alvira, I’m not on the verge of middle-age, don’t have long dark hair or wide brown eyes, no matter how awe-full (see what I did there?) they might be. Now if the description had been something like:

“Alvira pulled the new dress over her head, only to grimace at her reflection. Not right. She was already a tall woman, and the drop waist made her lanky rather than elegant.”

“Alvira stood a little taller at the sight of her new haircut. Her dark hair had been tamed into something glorious.”

Why do these work better? Because while I don’t have dark hair, I’ve had a haircut that made me FEEL awesome. I’m not tall, but I know the feeling of putting on a dress that just doesn’t suit. And you’d be hard pressed to find someone who has never experienced the poorly-timed pimple. So there is an emotional connection and that is what allows me to care about this woman as I did not care about the woman describing herself in the mirror with whom I had nothing in common.

Any point at which there is a deliberate stop to describe something in detail there is an immediate drop in pacing and flow. That doesn’t mean things should never be described, but doing so should not have to stop the story. If you want to show that Alvira looks younger than she is, show it in the way people interact with her – passed over for promotions, assumed to be in a different age bracket when taking a survey, amusing interactions when blind-dating… there are a hundred more creative and realistic ways than having either a narrator point it out to us, or have Alvira boast of it before the looking glass. And if there is no situation in which this can be shown? THEN YOU DON’T NEED IT. Cut out the reference entirely, because your readers obviously don’t need to know she looks youthful despite her age, and the information will just piss them off/distance them/drag the pacing unnecessarily.

Is it important for us to know Alvira has dark hair? Is it important for us to know that she is tall? Not everything in a description has to be there for plot reasons, but think twice about gratuitous descriptions that tell us nothing about Alvira’s character, her strengths, her weaknesses, her foibles, her loves, her dreams, her angsts. Unless she’s proud or uneasy about her height, I don’t really care if she’s five foot or six.

So when can I use a mirror?

The first situation is as described above – simple descriptions with emotional weight and context that give us a better understanding of the character.

Where the character themselves is unsure of what they are going to see. Have they sustained an injury – tell us about the injury, but again, if I had fallen on my face and wanted to check the damage I would be focussing my attention on the damage not on the colour of my hair or eyes.

The only use for full character description in the mirror is a situation where we have been with a character for a while, we know something about what they look like, have filled in the gaps ourselves, but now they have happened across an evil witch in the forest who has totally altered their appearance. BUT even in this situation, we must give it emotional context rather than turning it into a list.

“Don’t tell me what the character sees. Show me how they feel about it. That is how I get to know and care about your character, rather than just forming a picture of their shell.”