Lord of the Funny Strings – Some times making up titles sucks!

Making up book titles is both the best and the worst part of book production. When you hit on one that works, that not only sounds good but also works for your book and isn’t already taken, there is no better feeling. But, as happens all too often, it just isn’t quite right.

Here is a sample page from my notebook from the attempt to find titles for all three books of The Vengeance Trilogy. 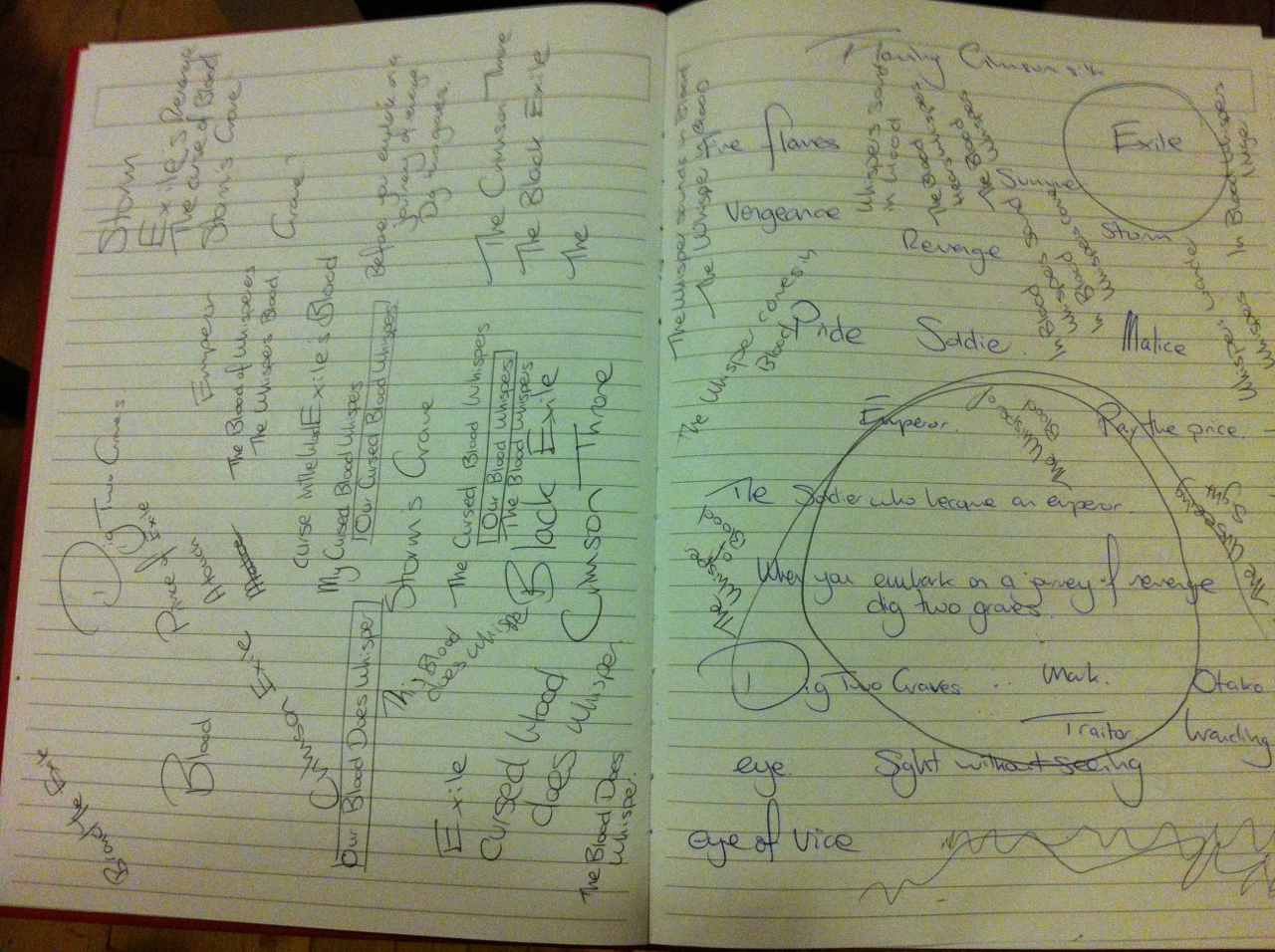 There are many more pages where this came from. This was one of the last brainstorming pages. Earlier pages were all words and there were many false starts and many many bad ideas.

There is something magical about a title. It is likely to be the first thing any prospective reader knows about your book. “Hey, have you read BLAH?” … Think it isn’t important how it sounds? Think again. Say your title. Say it in a million funny voices if you have to, anything to see if there is a problem with the way it sounds. One of my early working titles for this story in its very early stages was The Errant Pawn … bad idea. It looks ok in print, but when you say it out loud it inevitably causes a bout of sniggering.

Titles have to capture interest, yes, but they also have to signal to a reader what genre the work is in. Various ideas that showed up in my notebook sounded like the wrong genre. “The God Within Us All” sounded too spiritual. “Dig Two Graves” sounded like a crime novel. If you pick up a book called something like: “The King of Sparta’s Daughter” chances are you’re going to be reading an ancient greek romance as opposed to a blood-thirsty adventure, although either way there is likely to be a whole load of sweaty spartan warriors, because some things transcend genre.

And as if there wasn’t enough to deal with, titles also have to steer clear of cliche and coming across as too generic. In fact, really good titles are very hard to come by. Two of my absolute favourites are “Heaven’s Net is Wide” by Lian Hearn, which has emotional connotations as well as giving you the impression lots of characters are going to die, and “Red Seas Under Red Skies” by Scott Lynch, which is just beautiful. The first book in his Gentleman Bastard Sequence, “The Lies of Locke Lamora” is also a great title, the alliteration really makes it work.

Perhaps there is a good reason why titles don’t usually fall to the author. But for those authors who have to do such things for themselves, the moment you get it right, when you wake up with the name on your lips, when it comes to you while you’re dashing about trying to get two little kids in the car, it is magical. Absolutely magical. It might yet turn out there was a better title, but when you see some of the bad titles that come out on the shelves I think it is safe to say that is true of every book ever written.