This is one of those short beautiful books that, while it didn’t make itself impossible to put down, has certainly left its mark upon me. Simple and well-written, Stardust is a reminder of everything a story is and all a story needs to be. I find myself with so little to say about it. It is neither slow, nor boring, but nor is it the most amazing thing I’ve ever read. It is charming and joyful and full of character, a story about a boy born in the wrong place whose journey to find himself will make you smile.

It defies star ratings. It is above that, as though it isn’t even trying to compete with other books as it is so far superior in purpose. Stardust doesn’t try to shock you or frighten you or make you cry, it just seeks to entertain in the most beautiful way it can.

Review – The Lies of Locke Lamora 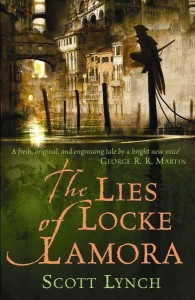 The Lies of Locke Lamora needs another review like I need a truckload of outdated desktop computers, but hell, I’m an opinionated girl so here we go.

I don’t usually like to read reviews of popular books before I read them, as it can colour your experience of them, but it’s hard to avoid the general industry enthusiasm for this book. Those who love it really really love it. They call it the love child between Ocean’s Eleven and any number of other awesome fantasy comparisons depending on whose review you read.

For me, I wish I hadn’t read the Ocean’s Eleven comparison, because it left me constantly waiting for the point where Locke Lamora and his gang were going to pull the epically complicated and convoluted cat (heist) out of the metaphorical bag, when this is an altogether different kind of story, although admittedly containing a heist. But that is where the similarities end.

In its heart, The Lies of Locke Lamora is a simple story (not a bad thing at all, this makes it very focused), a story of survival against all odds. It contains the greatest dialogue I have ever read ever in any book… ever. Hands down.

It also has the greatest opening hook I can recall ever reading. If you read the first page and a half you’ll keep reading.

I read this book VERY SLOWLY. This is often the case for me, as it’s been over a year since I found a book that had me reading non-stop start to finish as fast as possible. More often I find that my critical approach to reading (thanks to being an author myself, damn it) makes it hard to get absorbed in the books I’m reading. It is a curse, but one I am learning to live with. It took me a few months to get through The Lies of Locke Lamora, but there was never a point where I thought about putting it down for good. I found some of the early descriptive paragraphs difficult to wade through, and found that I never REALLY connected with the characters enough to cheer for them, but The Lies of Locke Lamora is beautifully written and unique and I have the second book on my shelf ready to go.

With spoilers I could write a lot more about this book, but I’ll keep it short and sweet. I would recommend this book to any fantasy fan and even a few non-fantasy readers, as it isn’t heavy on the magic swords and wizards business.

I picked up this book randomly at my local bookstore when I was looking for something new by an Australian fantasy author I had never heard of before, and I was not disappointed. I read it in two days, ok maybe one and a half, which is something of a feat when I was at the beach with two little kids at the time.

Clearly that means it has excellent pacing and a decent plot. If it suffered anywhere it was in characterisation. The main character, Rostigan, is the best developed character of the lot and he carries the plot without difficulty, but there is a lot of black and white here, and where there is grey the characters are drawn with great simplicity. It is usually characters that carry my interest, so I was surprised, after how much I enjoyed reading this, to realise that I didn’t really give a damn about any of them. That being said, they were all likeable and believable, just none of them touched my heart in that special way that makes you really invest.

The idealistic world (read beautiful cities and clean hobos) was nicely drawn, the magic was different to anything I had read before, and it didn’t shy away from the gruesome without getting overly descriptive. It was also refreshing to read a fantasy novel in which very powerful people actually USE their skills/magic to the limit of what they are capable of, rather than the author constantly trying to find ways to keep them from doing so.

All in all it was a quick, easy read with enough to carry you through to the end. Very enjoyable, but I’m not sure it would be complex enough to carry a reread. Definitely recommended to anyone who likes their fantasy fast paced and light on description, perhaps not so much for those who like the in depth epic.